Wiker reveals that it was never the intention of the Founders to drive religion out of the public square with the First Amendment, but secular liberals have deliberately misinterpreted the establishment clause to serve their own ends: the de-Christianization of Western civilization. The result, they hope, is government as the new oracle. Personal faith in a deity is replaced with collective dependence on government, and the diversity of religious practices and dogmas is reduced to a uniform ideological agenda.

The liberal strategy is two-pronged: drive religion out of the public square, and then, in religion's place, erect the Church of the State to fill the human need for a higher power to look up to.

But what was done can be undone. Outlining a simple, step-by-step strategy for disestablishing the state church of secularism, Worshiping the State shows the full historical sweep of the war to those on the Christian side of the cultural battle--and as a consequence of this far more complete vantage, how to win it.


The rotunda of the Wisconsin State Capitol building now hosts an unusual nativity scene during the holiday season. Language that used to be reserved exclusively for Jesus Christ is now applied in a very different context. But Christian institutions are under threat as well. The Department of Health and Human Services has announced that even religious employers are now required to provide health insurance that covers contraception, sterilization, and abortifacient pills.

So Catholic hospitals will have to provide contraception for their employees, and Evangelical colleges will have to pay for abortion pills. In other words, Catholics and Evangelical Christians now have to run their institutions according to a radically different moral view from their own, a morality imposed on them by the secular state—or get out of the business of running schools and hospitals altogether. There are all too many signs in our times that there is a fierce battle being waged over who will be in control in America.

As it says on the plaque in the Capitol, At this season of the Winter Solstice, may reason prevail. There are no gods, no devils, no angels, no heaven or hell. There is only our natural world. Religion is but myth and superstition that hardens hearts and enslaves minds. There is a clue in the messianic enthusiasm of the language so frequently applied to our president. Barack Obama is the quintessential liberal politician, and apparently he seems a lot like the Messiah to a large number of people.

Possibly even to himself, if we go by the this was the moment when the rise of the oceans began to slow and the planet began to heal speech.

Religious zeal for Obama is so remarkable that several collections of quotations celebrating his alleged Messiah-like qualities appear on the internet. Not in the normal way, anyway Many spiritually advanced people I know not coweringly religious, mind you, but deeply spiritual identify Obama as a Lightworker, that rare kind of attuned being who has the ability to lead us not merely to new foreign policies or health care plans or whatnot, but who can actually help usher in a new way of being on the planet , of relating and connecting and engaging with this bizarre earthly experiment.

These kinds of people actually help us evolve. They are philosophers and peacemakers of a very high order, and they speak not just to reason or emotion, but to the soul. Louis Farrakhan told Nation of Islam devotees, You are the instruments that God is going to use to bring about universal change, and that is why Barack has captured the youth. When the Messiah speaks, the youth will hear, and the Messiah is absolutely speaking.

The truth is that secular liberalism is a political religion, one that is much, much older than Barack Obama. As we shall see, the push to replace Christianity with a secular liberal religion has already been going on for literally half a millennium. While Barack Obama is not the problem, the messianism that marks his political career is instructive. Liberal secularism has already become a state religion more than once in world history, and the current attempt to make it our state religion is in complete continuity with that history. All during that long history, it has been at war with the Christianity that its adherents so passionately want to displace.

Our contemporary battles are part of that long war. The attacks on Christianity always seem to flare up at Christmas—which, after all, celebrates the very beginning of Christianity.

Your audiobook is waiting…

Over the past few years Santa Monica, California, has been the scene for the now all too familiar Christmas battle between those who want to put up a nativity scene and those who most zealously do not want to see Mary and Joseph in a stable looking adoringly at the Christ child in a manger. For sixty years Santa Monica had the tradition of setting up a series of life-size scenes in Palisades Park depicting key biblical moments such as the Annunciation and the Nativity of Christ. Given the limited number of display booths and the large number of businesses and associations vying for the honor of constructing the scenes, the city had a lottery system.

In , the atheists won eighteen of the twenty-one places. So viewers working their way along from booth to booth would come to one with, for example, a sign quoting Thomas Jefferson, Religions are all alike—founded on fables and mythology, and on the reverse, Happy Solstice. The displays are moving to private turf.

People who bought this also bought...

The Freedom from Religion Foundation is now suing the U. Forest Service has unlawfully misused federal land owned by all of us to further Christianity in general, and Roman Catholicism in particular. This diminishes the civil and political standing of nonreligious and non-Christian Americans, and shows flagrant governmental preference for religion and Christianity. There are plenty of other militantly secularist organizations pitching in to strip Christianity from every public space. The convoluted reasons given by the administration were as follows: the overly impacted December schedule, which led to the original performance dates falling on Hanukkah, concerns about the inclusiveness of material, and the desire of the district to respect the cultures of everyone.

Another point that was discussed was the power of words and the impact they can have. In Tecumbia, Alabama, last year, a primary school was asked that Silent Night be given the boot from their annual Christmas pageant. A school memo explained that snowflakes and snowmen were safe.

Worshipping the State: How Liberalism Became Our State Religion by Benjamin Wiker

The examples could fill a book. Banks yank Christmas trees that might offend customers; employees of mega-stores are told that they may not utter Merry Christmas. Are all traces of Christianity being successively and successfully removed from the public sphere so as to leave an empty space, a neutral public square where people of all religions and none can be equally at home?

It sounds as if the FFRF is concerned about protecting non-Christians, but its real goal is to remove religion as such and replace it with a kind of humanist paganism. Apparent neutrality is a key secular strategy in the war: pose as a protector of other religions against Christianity, and under that pretense use the courts to drive all religion out of the public square so that something else can be put in its place.

Secular liberalism is well on its way to establishment as our state religion. The anti-nativity scene in Wisconsin captures exactly what is going on. The war on Christmas has been going on longer than we thought—almost two thousand years. And Christians soon will be enemies of the secular state once again, if the aggressive secularizers achieve the final victory. The reality of the war on Christianity is easily seen in the direct assault on Christianity by the various atheist or even explicitly pagan organizations.

Taking down Ten Commandment plaques, removing religious statues, prohibiting prayers at graduation, eliminating Bible reading in school, denying funding for religious school students even for transportation and other secular purposes—all of this is a now familiar, and has been for some time, running all the way back to the landmark Supreme Court case, the famous or infamous Everson v. Since Everson , the federal government or secular liberal groups using the federal government has been bent on driving Christianity out of the public square.

Everson v. They don't want it. Half the time they send it If you're in a troubled marriage, divorce might seem like a reasonable option. But in But in most cases, it's a calamity. Fraud: How the Left Plans to Steal the. Can an election be stolen? 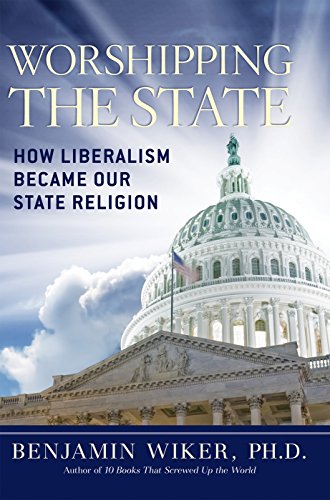 But what was done can be undone. Outlining a simple, step-by-step strategy for disestablishing the state church of secularism, Worshiping the State shows the full historical sweep of the war to those on the Christian side of the cultural battle--and as a consequence of this far more complete vantage, how to win it.